It all started with Alli, who came to us serendipitously … she was the answer to a prayer at a time when I needed someone to lean on. Little did realize how amazing a poodle can be when it comes to providing a therapeutic paw!

I was fortunate to have purchased her from a wonderful woman in Florida. She had bred a one-and-only litter with her pet Zoey and a breeder’s stud dog. The stud came from a significant Piccadilly influence, with CH King Champagne’s Taste being her maternal grandfather. The litter was from hip and eye certified parents. All the pups were clean, well-cared for and dearly loved. That was good enough for me.

As Alli grew it became clear to me (someone who had bred and showed dogs and livestock all of my life) that Alli was a beautiful canine. I had her evaluated by a breeder/handler and was thrilled to hear she was sound enough, pretty enough and enough of a representative of the breed standard that puppies could be in our future!

After completing all of Alli’s testing (hips, eyes, SA, Vonwilibrand’s Disease, Neonatal Encephalopathy), we looked for a suitable mate. We were lucky to make a connection with Dr. Christine Scruggs, the founder of Tivin Standard Poodles. We bred two litters with Tiven Boys (see Puppies) with an exceptional outcome. Alli is now retired from breeding and living out her years as the matriarch of Wool ‘n Wind. She spends her day working in many venues as our lead therapy dog. She is requested by name at several area nursing homes, libraries and schools. She has been a great source of support to area students when we have been called to provide grief counseling following a tragic event affecting one of our school communities. Alli lives up to her name everyday!

Ebbi is our first Wool ‘n Wind offspring to be added to our breeding program. Ebbi is an agile, compassionate girl with a wonderful temperament for therapy work. After her health testing was complete, Ebbi had her first litter in June of 2015 in a mating to Dream Catcher’s Come Alive. This mating produced beautiful puppies, with two girls moving on to show ring. Ebbi had two more litters working with Alaman Standard Poodles. Her second litter, bred to Jordan (GCH Alaman’s Wanna Be Like Me) produced Moe, our boy who went to be a Champion Top 20 dog at 11 months old! After three litters, Ebbi was retired from our breeding program to fulfill her number one role in life – being Bill’s constant companion and Therapy Support Dog in his various school environments. She thrives as a Therapy Dog, working her magic with developmentally disabled children, physically handicapped youth and children on the Autism Spectrum.

Amelia is our Ebbi (Wool ‘n Wind’s Frolic on the Ebb Tide) and Trace (Dream Catcher’s Come Alive) pup. She is my ”Heart” dog; that one special dog who came to me because she was meant to be mine! ‘Meli’ is an amazing girl with a very correct poodle coat (soft on the bottom and course on the top), but what makes this girl special is the personality she got from her daddy. Trace was a special boy with a heart the size of Texas. His disposition was the reason we were so drawn to him – his empathy and warmth radiated from his very being – and he lives on in his offspring. Amelia is a classic ‘Trace’ baby who simply lives to love! After completing her Championship and health testing, Amelia joined her mother and grandmother producing beautiful Wool ‘n Wind puppies. To date, she has dammed three litters producing some of the healthiest, most loving puppies we’ve ever had! Many of Amelia’s pups have gone on to forever homes with a job to do…support an autistic child, look after a parent with Alzheimer’s, provide an alert for a medically impacted owner … knowing that our pups have helped a few folks live a little better, feel a little safer, or be a bit more secure … is our reason for doing this work that we love! 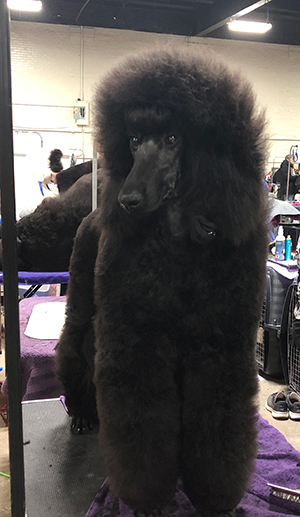 “Macy” (Ch Harten’s Just Charge It) joined us in the fall of 2018. She is a puppy we purchased from Sharon Slovoba in Missouri. Macy, the progeny of CH Harten’s Spendthrift and GCH Safari’s Subversion, had an impressive debut as a puppy winning two Puppy Group One’s and one Best Puppy in Show to earn her ACK Puppy of Distinction’ title. Macy’s rise to her championship was a little derailed by COVID-19, but as soon as shows opened, Alan Waterman quickly brought her to two five-point majors and completed her title. Macy has been bred with Maslow and we are eagerly her first litter due in February, 2021.

Alaman’s Come Party with Me!

“Hailey” (Alaman’s Come Party with Me!) is our newest addition. She is a very bright, inquisitive diva from Alaman Poodles. Early into her arrival to our home we began to call her “Hailey Hot S#@t because … well … she just is! Hailey is a “Jordan” (GCH Alaman’s Wanna Be Like Me) daughter out of ‘Tess’,  (“Ch Alaman’s You Haven’t Seen the Last of Me”). Tess was a beautiful puppy with an incredible story and we loved from her start. ‘Jordan’ , who also sired our ‘Moe’, is magnificent. Hailey has finished her Championship as an AKC Puppy of Achievement, earning “Best Puppy in Specialty” at the Massachusetts Poodle Club Specialty in April, 2021, and completing her Championship in May. She began to earn her Grand Championship points that same weekend going Best of Variety, Best of Opposite and Select Bitch over the next three shows. Her puppyhood career concluded in Bainbridge NY with another BOV, BOS and Select. She will return to the ring as a Special in the fall of 2021.